Philippa Johnson will represent South Africa as an equestrian in the Paralympics, having gone from competing at top dressage level to starting from scratch again after a car accident 13 years ago left the right side of her body disabled. 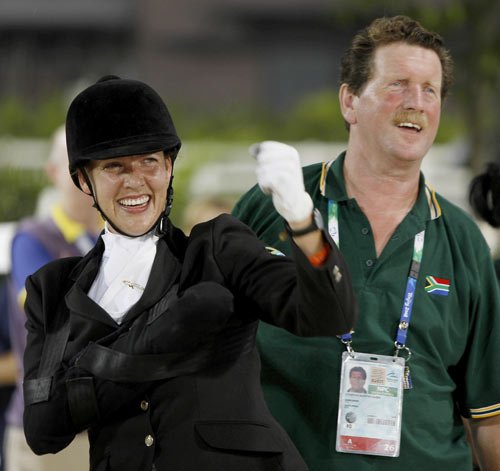 Philippa competes at the Beijing Paralympics.

Like many of her fellow athletes, Philippa Johnson’s Paralympic dream has not been without its obstacles.

The 37-year-old, who has been riding since the age of four, had planned a move to Germany to compete at top dressage level prior to her accident. In the aftermath, professionals made the heart-breaking conclusion that her disability acquired from the accident would mean Philippa would no longer be able to do what she affirms as â€œthe one thing that I loved most in the world.”

Yet in a remarkable display of determination, Philippa emerged to defy her doubters, adding that she was also â€œincredibly blessed in that I had amazing support from my family and friends.”

In January 1999, she proved there is no such thing as impossible and managed to climb back into the saddle even though her father had to lead her round to begin with. Just a year later, she accomplished a major feat when she entered her first competition since the accident — and went on to win.

I had to downgrade my horse to the lowest competition level because I was so limited in what I could do,” Philippa said. But it was great, we won!”

This proved only the beginning of a string of tremendous achievements for the strong-willed equestrian. In her first Paralympics, Athens 2004, Philippa won two silver medals only to build on this success in championing two gold medals in Hong Kong in 2008, which she considers the biggest accomplishment of her career so far.

At the 2012 Paralympics, Philippa is looking forward to competing in the Team Test, Individual Championships and Musical Freestyle along with horse and companion Lord Louis, stating that her ultimate goal is always to medal.”

It’s back to Belgium and continue training as it's still competition training,” says Philippa, who came to Europe in 2002 to compete in a competition in Moorsele, Belgium and subsequently decided to stay, having found a soul-mate in her previous riding companion, a horse named Benedict.

While South Africa will always be home for Philippa, it would appear Europe is her calling for the meantime.

At the moment, I plan to stay in Europe,” she says. The more I learn, the more I see that I have to learn and I still have a lot of goals I would like to achieve.”