Burgmans Benedict is a German bred Hannovarian by Borneo (by Bolero) out of Welfee.
He is a chestnut gelding and is born in 1994.

Philippa’s partnership with Benedict is a very special one.
Benedict loves affection and Philippa has always said if she could hire someone to play with him all day,
he would be the happiest horse in the world. He is also a horse that has many different expressions.
He lets you know in no uncertain cheap jerseys terms what he is thinking or feeling. He is a very brave horse.
You can fly an F16 fighter jet between his ears and he doesn’t do a thing.
This has been tested as he was stabled at the foot of the American Air Force Base and had F16’s taking off,
landing and doing bumps and circuits every day over the stables.
He dislikes farm animals, so don’t ask him to pas a cow, sheep or an alpaca. He thinks they are really scary. 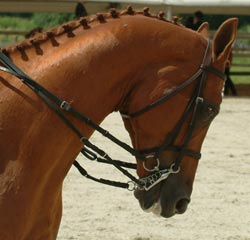