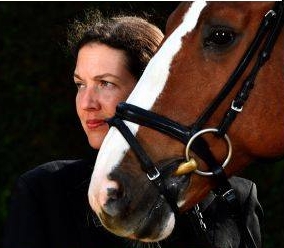 "Don’t allow anyone to put limits on your dreams"

Philippa Johnson – Republic of South Africa Philippa Johnson, a para-equestrian rider,
is born on the 9th of December 1974 in Johannesburg, South Africa.
She loves South Africa, though her biggest passion "horseriding"
brought her in 2003 to Belgium.
She found her horse and soulmate Benedict in Belgium and her current
trainer Chris Haazen.
After a very traumatic car accident in October of 1998 Philippa became disabled.
She lost all her strength in her right arm and 60% of the strength in her right leg.
After a long revalidation nobody could stop her from riding.
Before her accident she was planning to go to Germany to be trained on topdressagelevel.
After her accident she had to learn from the beginning and this time with a severe handicap.
She learned to ride again, but it was very though.
Within a year she was back in the competition ring.
Unfortunately being back in the ring made her a little brave.
The day before the second competition she tried to mount her horse without help
and lost her balance and fell.
Unfortunately she broke her back.
Again she had to recover and revalidate.
In spite of all negative advice from her doctors, she started riding again.
Philippa always says: "Don't allow anyone to put limits on your dreams".
And she made her dreams come true.
With the help of her South-African coach Katrine Puttick,
who helped her during the whole process, it worked.
Philippa started riding again.
She became a successful international para-equestrian rider who competes at grade IV.
In 2002 she came, with the South African team and of course with her coach Katrine,
to Belgium for an international para-equestrian competition in Moorsele.
They came to Belgium and had to find horses for the team to ride at the competition.
During their stay Philippa met Benedict, via Rutger van Werkhoven.
At that stage the Hannovarian gelding was 9 years old. This was love at first site.
Philippa bought, with the help of Rutger, her horse Benedict and packed her bags
and moved to Belgium.
She came to Belgium for Benedict but also because riding dressage at top level is more developed in Europe.
The couple found in Belgium their current trainer Chris Haazen.
From 2003 on Philippa and Benedict prepared for the Paralympics in Athens.
Her dream: "To place in the first five finalists of the Paralympics in Athens" came true in 2004.
She won silver twice. After the results in Athens,
Philippa made the decision to stay in Europe to prepare for Hong Kong 2008 together with Chris.
She and Benedict did together a fantastic job at the olympics.
They won the first equestrain gold medal ever for South Africa.
South African history is also made because this is the first time that South Africa has sent a complete equestrian team to the Paralympics.

Philippa has lived in Belgium now since 2002.
In the meantime she found two other competition horses,
Verdi and Lord Louis, while Benedict is enjoying his well deserved pension.

Her goal is to ride at able bodied Grand Prix level in Europe.
She’s doing really well on her way to get there.
With Verdi she already starts at International level in the Intermediaire I
and Lord Louis is doing really well in the Prix St. Georges.
Philippa represents South Africa in dressage.
She is proud of her home country and wants to represent South Africa
in dressage all over the world.

She also found love in the arena.
Her Irish husband James Dwyer is also a para-dressage medallist
and together they train others in the sport.
It took them about eight years after their first meeting to finally date.
She thought he was married and he thought she was not interested.
But eventually the pair found each other.